Are you looking to use social media to boost your online presence and sales? It may seem simple but publishing random posts to your social profiles without any strategy to your content may not give you the results you’re looking for. In order to be successful with social media you’ll need a plan in place – a social media campaign that is designed with your business goals in mind.

How can a creative social media campaign help you reach your goals? Read on to find out!

In this guide we’ll cover:

Why is a Social Media Campaign Important?

Having a well-thought-out plan when it comes to social media is important for many reasons. In order to be successful at reaching your goals through social media, you’ll need to develop a plan that is specifically designed to help reach these goals. More specifically, you need a social media campaign.

For example, if your goal is to improve engagement rates, you’ll want to set a plan in place that focuses on quality, eye-catching, shareable content to capture your viewers’ attention.

A well-developed plan that includes considerations such as which social platforms to focus on, the type of content to post on each platform (based on your target audience) and how to effectively track your results so that you can make improvements as you go can greatly improve your success.

How to Develop a Social Media Campaign

A strategic social media plan can be developed through careful planning, target market research and a lot of time and effort. Spend some time familiarizing yourself with each platform, each platform’s target audience and the content that each one enjoys.

The following examples will showcase several of the year’s best social media campaigns to help you come up with some ideas of your own! 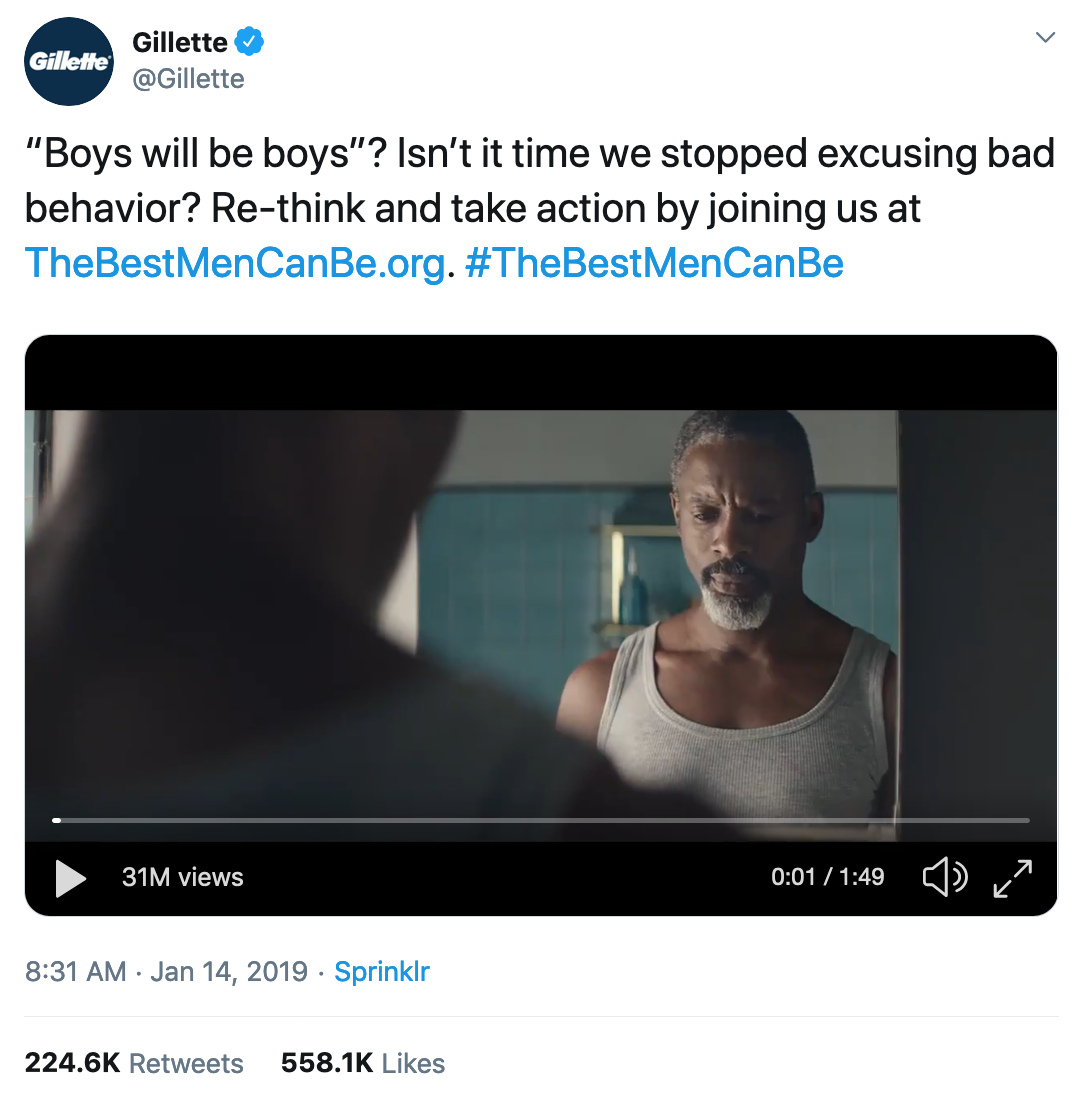 Campaign: We Believe: The Best Men Can Be

Plan and Goal: The goal of this campaign was to gain attention by contributing to the active #MeToo movement. Gillette created a video addressing aspects of the movement and sharing their opinion on the matter.

What Worked and Why: Although not without scrutiny, Gillette’s campaign was wildly successful for 2 main reasons.

Results: With more than 31 million views, Gillette’s video also had amazing interaction rates with over 224,000 retweets and 558,000 likes.

Gillette also increased their overall visibility on social media with this ad, receiving 1.5 million mentions in the week after releasing the video compared to only 10,000 mentions the week prior.

What’s the best way to use paid advertising to grow your brand? Learn how in  “How to Start a Paid Media Campaign for Ecommerce Growth.” 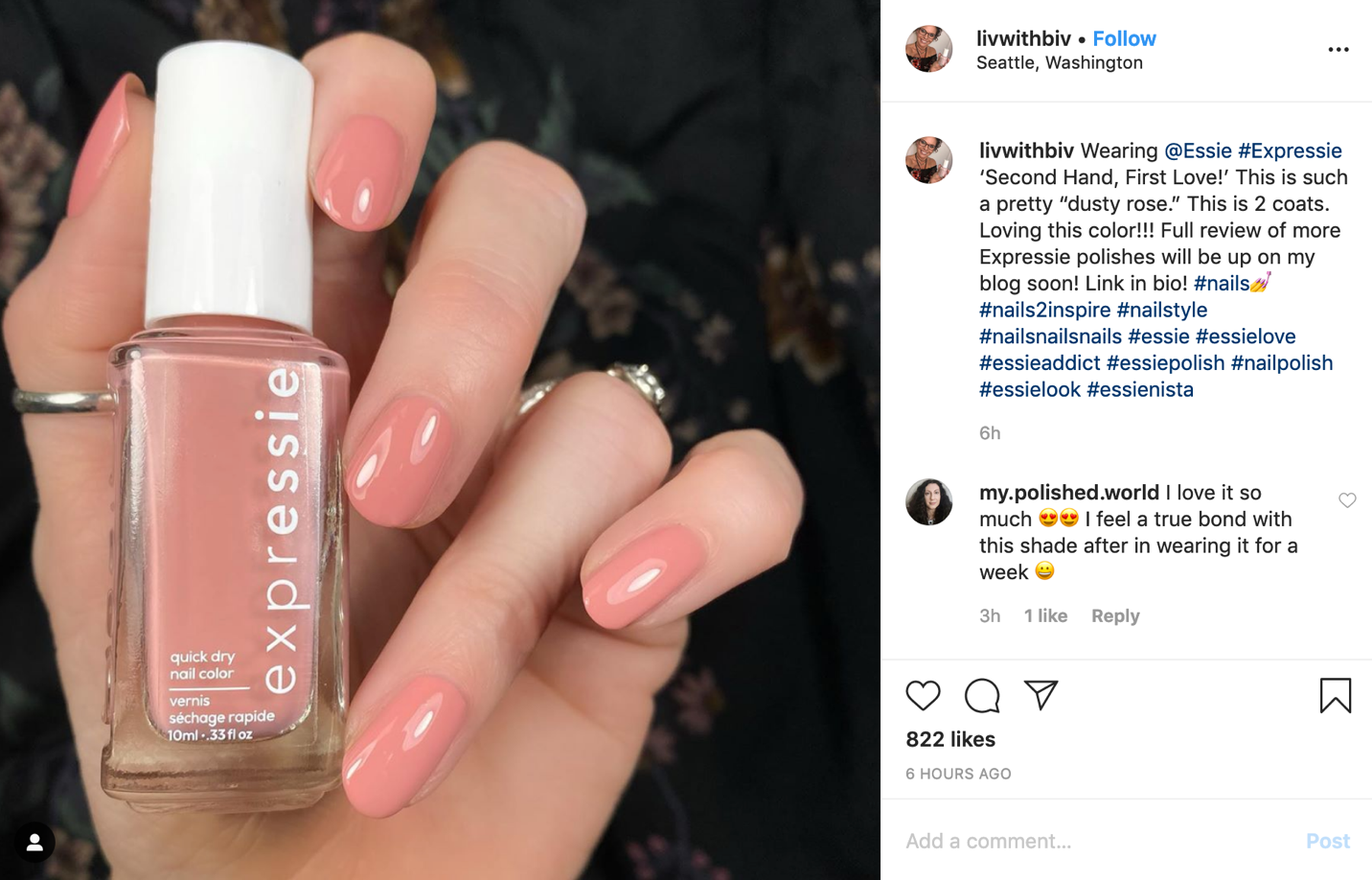 Plan and Goal: This campaign was designed to cultivate user-generated content while increasing brand awareness and engagement rates. In order to do so, Essie asked Instagram users to post images of their nails with Essie nail polish and to use the hashtag #essielove.

What Worked and Why: Essie’s strong understanding of their audience and the platform on which their target market is most active allowed this campaign to be a success.

By choosing Instagram as their campaign platform, Essie was able to embrace the culture of the community on this platform i.e. allowing people to demonstrate their creativity.

Results: Essie was successful in garnering a substantial amount of user-generated content, with over 300,000 images posted using the hashtag #essielove. This undoubtedly improved brand awareness. 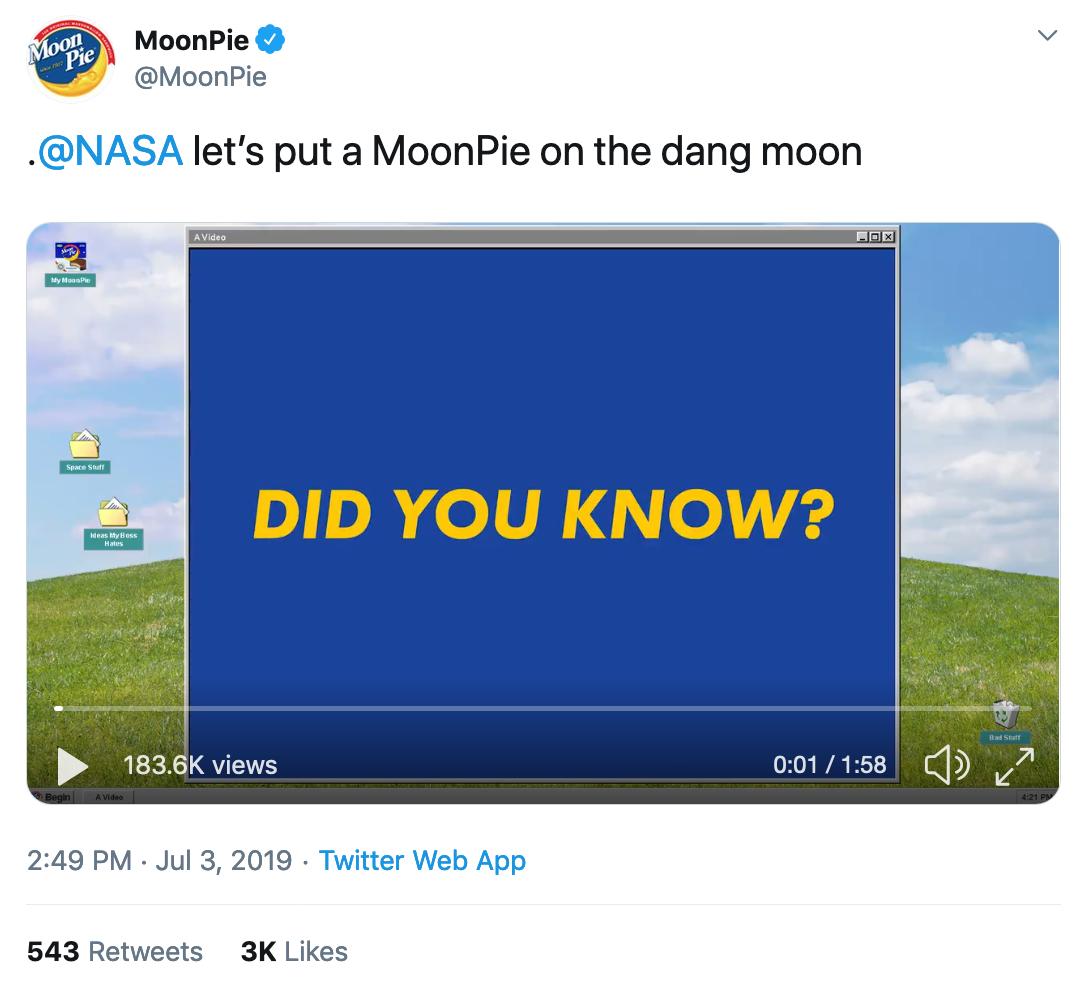 Plan and Goal: Moon Pie’s objective was to raise awareness for their brand by using a current event that was related to their product. In response to the online buzz for the anniversary of NASA’s Apollo 11 moon landing (#Moon2024), Moon Pie sought to get NASA onboard with taking one of their Moon Pies to the moon.

What Worked and Why: The humorous nature of this campaign was highly successful! On top of being highly shareable because of its humor, the campaign was also successful because they were able to take advantage of a current event and use it to place themselves within a widespread topic of conversation.

Results: This campaign was very successful in increasing awareness, as well as interaction rates. Moon Pie’s tweet received over 500 retweets, 3,000 likes and their video saw more than 183,000 views – not bad for a playful day on Twitter! The tweet also received attention from influencers who engaged with it, helping to spread the word even further. 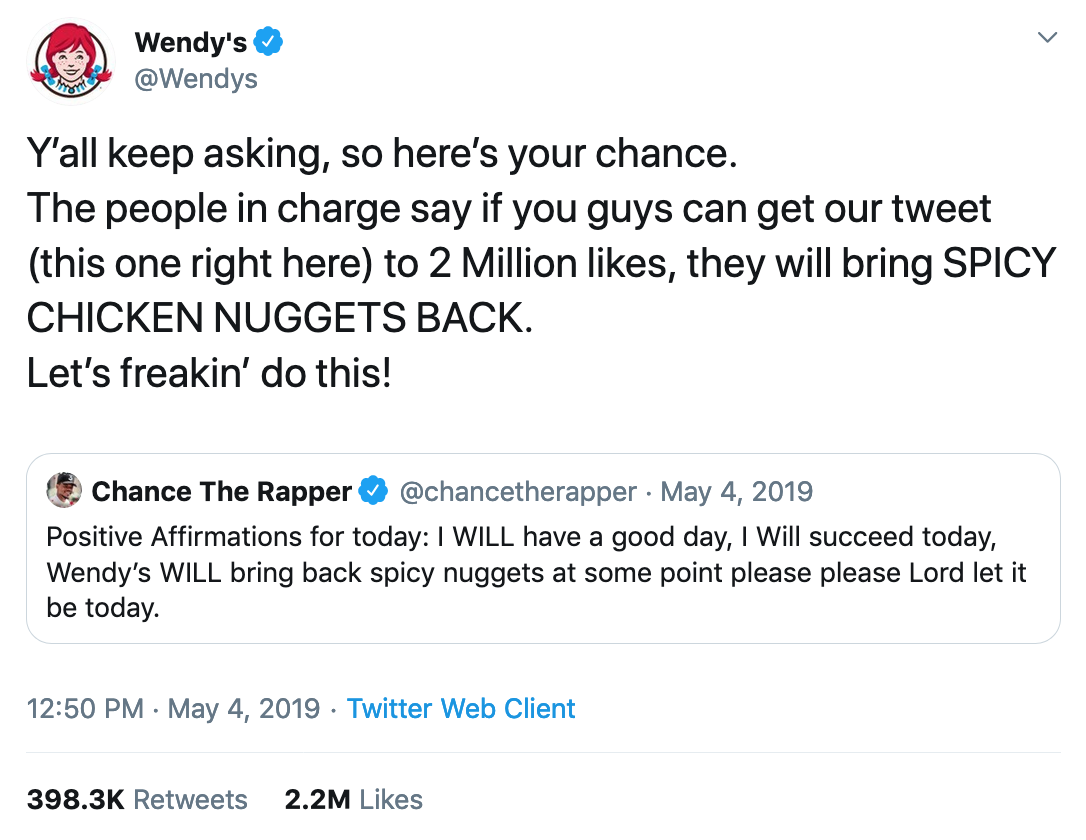 Plan and Goal: Wendy’s is a Twitter icon – always thinking of clever ways to create a buzz on social media. With this campaign, Wendy’s attempted to generate engagement and start a buzz surrounding an old product of theirs – Spicy Chicken Nuggets. The fast-food chain presented their audience with a challenge – like their tweet 2 million times and they’d bring back their beloved Spicy Nuggets. Guess what – it worked!

What Worked and Why: The campaign was a major success. By listening to their audience (and their love and need for Spicy Nuggets), Wendy’s was able to create a fun challenge revolving around a popular request. By providing a specific challenge (i.e. 2 million likes), Wendy’s was also able to get the exact results they were looking for.

Results: Wendy’s tweet definitely created a buzz, garnering high levels of engagement including more than 398,000 retweets, 2.2 million likes and attention from celebrities like Chance the Rapper! 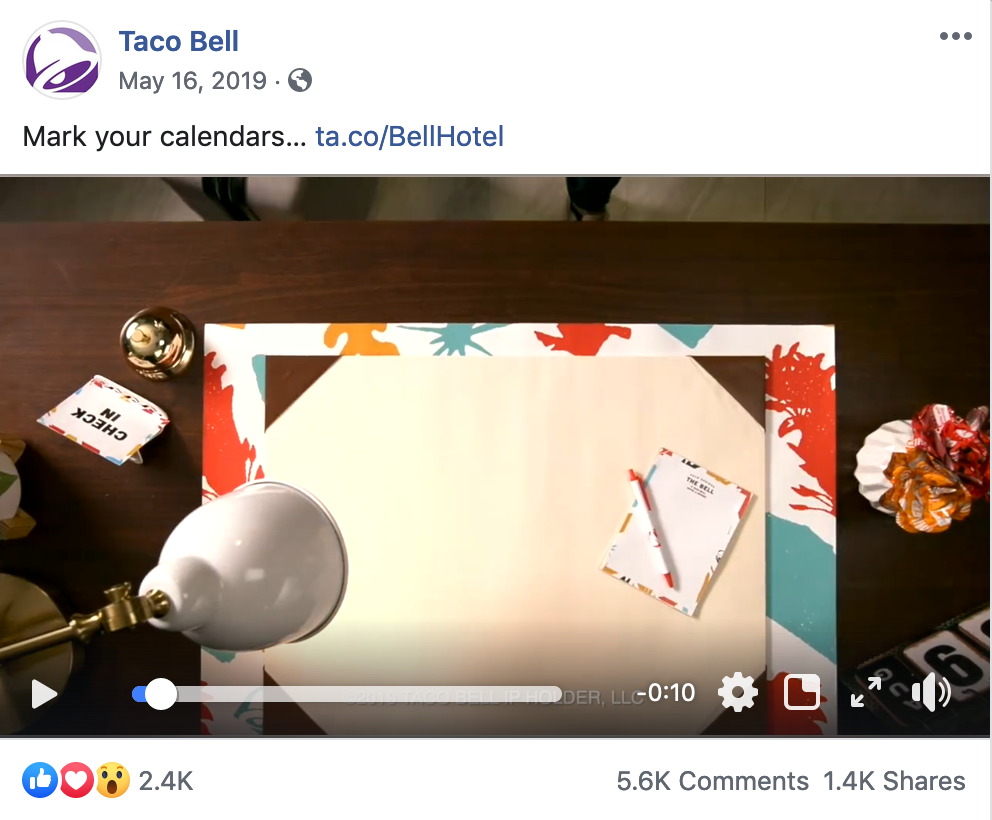 Plan and Goal: Taco Bell decided to offer customers an exclusive experience by opening “The Bell” – a Taco Bell Hotel. Open for four days only, this strategy was developed as a way to boost their online presence, increase brand awareness and create a buzz. Essentially, the goal of this outside-the-box campaign was to generate millions of dollars in free advertising by doing something wild!

Taco Bell also included influencers in their plan – inviting them to stay at the exclusive hotel in hopes that they would share their experiences and positively promote the brand.

What Worked and Why: This crazy, creative idea elicited an explosion of activity online – greatly boosting Taco Bell’s visibility. Customers these days are looking for new and exciting content and Taco Bell’s immersive experience satisfies both of those cravings.

In addition to meeting all of these shareworthy requirements, The Bell Hotel offered an exclusive experience – another intriguing factor that helped to get viewers’ attention.

Social media influencers who were invited to the hotel also greatly helped to promote the brand by writing about, posting pictures of and sharing their experiences with their followers.

In order to run a successful social media campaign on social media, you’ll need a plan. Make sure to consider your ideal audience, what platforms they are most active on and what will grab their attention.

The most successful campaigns of 2019 show us how to succeed by knowing your audience and presenting them with shareworthy, buzz-worthy content.

Participating in topical conversations, addressing controversial topics, using current events, creating a challenge for your audience and/or doing something out-of-the-box are great ways to get the attention you are looking for online.

Take note from the brands above, brainstorm some ideas and you’ll be on your way to a successful social media campaign in no time!