Today, the craft of writing may seem more like an ongoing war with self-sabotage than any actualization of inner vision. The difficulty of actually starting to write comes mostly from a lack of direction or absence of inspiration – a lack of writing goals.

Possessing an intelligent set of writing goals, therefore, presents itself as an essential characteristic of the writer who wants to win.

SMART goals — goals that are specific, measurable, achievable, relevant and time-bound —  are great for setting and tracking realistic goals for writing that you can actually achieve. However, every creative is different and what works for others may not work for you.

Fortunately, we’ve collated a collection of how other creatives have set writing goals for themselves so you can see for yourself which one works best!

Before we get into the details, let’s get into the reasons why you should be setting writing goals in the first place.

Why Set Goals for Writing? 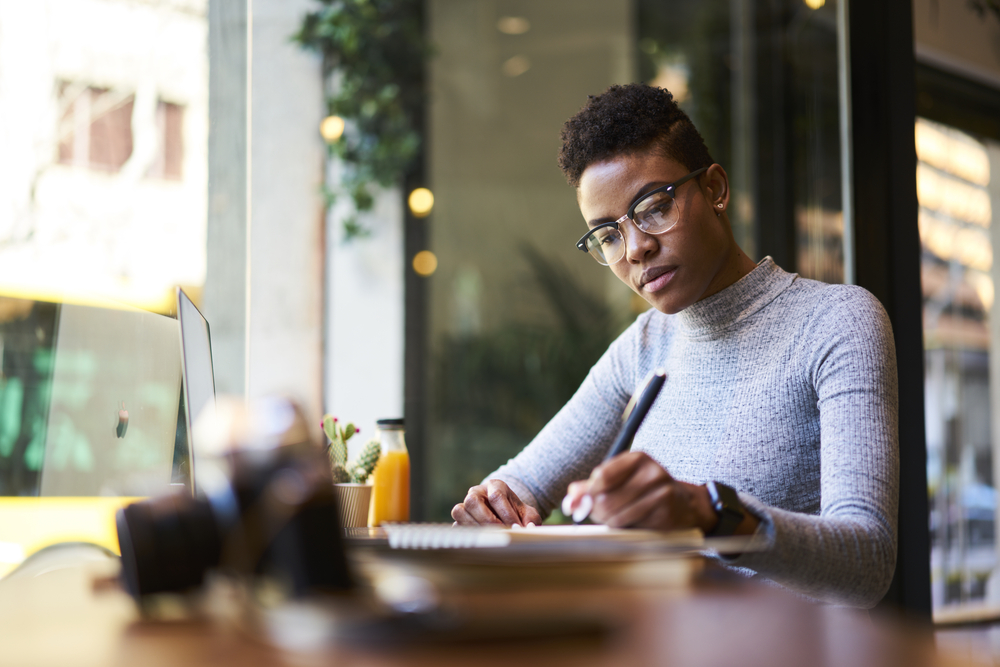 Our brains are complex organs and imperfect machines – we make mistakes and forget things. Is it any wonder why great ancient civilizations such as Mesopotamia, Egypt and China flourished with the advent of the written word?

Writing and the written word are essential in our everyday lives, but they’re also essential for personal growth and development, especially when it comes to improving your writing.

If you’re stuck in a rut and want to improve your writing, we’re here to tell you that improving may be easier than you think — and It all starts with goal-setting.

Here are 5 reasons how setting writing goals will help you achieve them.

1. Writing goals down helps you internalize them

As previously mentioned, we aren’t perfect machines. Our brains operate at full capacity as we navigate throughout our day reminding us to get adequate food and water, mediate our emotions and plan for the future.

Setting writing goals helps us actually remember what it is that we’re trying to achieve. In some ways, it can make the goal more tangible and concrete once we put pen to paper and commit to jotting it down. It’s a physical reminder of what it is we’re trying to accomplish.

2. You can plan out how you’re going to achieve your goals

Once you put pen to paper, your goals become more concrete and tangible. They no longer occupy the abstract recesses of your mind but exist out in the real world. From here, you can take your goals a step further by specifically planning out how you’re going to achieve your goals.

What specifically do you need to do to reach your goal? The act of writing out each step might jolt you into action. It’s easy for an idea to occupy our mind and for us to not do anything about it. Writing them out aids in planning out the process and how we can execute on them.

When you only have ideas floating around in your head and no plan or timeline to achieve them, it’s easy to become complacent.

By setting writing goals, you put pressure on yourself to execute your plan. Setting goals to improve your writing will pressure you to complete each and every task you assign yourself, lest you let yourself down and become content with failure.

Particularly if you have written down a completion date.

4. It allows you to track your progress

If you’re not writing down your goals how can you track your progress? If you only have one objective floating around in your head, then it’s not too difficult to keep that goal in the back of your mind.

5. You’ll review your goals objectively and filter for other opportunities

If you’re achieving everything you set out to achieve, you may find yourself inundated with countless other opportunities and directions. If these opportunities are not in line with what you’re trying to ultimately accomplish, then their plurality can potentially distract you. It may cause you to stray from your original path.

Writing all of your goals down lets you filter your opportunities to find out which goals are achievable, which ones aren’t, and which ones should be pursued at a later time.

How Others Have Set Writing Goals

Not sold on the importance of setting goals? Here’s what 2 prolific writers have said about setting goals to improve writing.

In his book, The War of Art, Pressfield compares the process to a military engagement. Writing is described as a conflict with resistance, mired by the ever-present force of self-doubt.

Overcoming resistance can be a near insurmountable hurdle for writers. Pressfield argues that a choice must inevitably be made by the writer to “stop studying the war” and instead “begin living the warrior’s life.”

He distinguishes the “…professional in contrast to the amateur” as someone who takes the vocation seriously. They have a writing space, dedicated hours, performance targets to reach and an overarching vision to guide them. The amateur does not take ownership of this attitude. Instead, writers are kept “busy” by resistance, stuck somewhere moving desktop files into folders or deciding whether they want to arrange their bookshelf alphabetically or by “vibe”.

American scholar, author and playwright, Charles R. Johnson, celebrates a similar ethos in his book, The Way of the Writer, when he describes drilling his undergraduate writing course students in a writing “boot camp.”

Johnson’s students would owe him 3 completed, full-length stories by the end of each term and all of them had to be different.

Of course, completing 3 full-length stories in one semester on top of exams, papers and other course commitments is a daunting task for anybody.

Johnson offered some respite to his students by stating that his students could write about any topic, as long as it was a different story.

But he was ultimately pushing his students to set measurable and attainable writing goals for themselves in order to finish their stories on time.

Whether it’s in an academic environment or for personal/professional growth, even Johnson believes that setting goals to improve writing is essential to honing your craft.

How To Not Set Writing Goals

Here’s where SMART goals come in. SMART by nature are designed to set realistic, attainable goals that are time-bound and measurable. 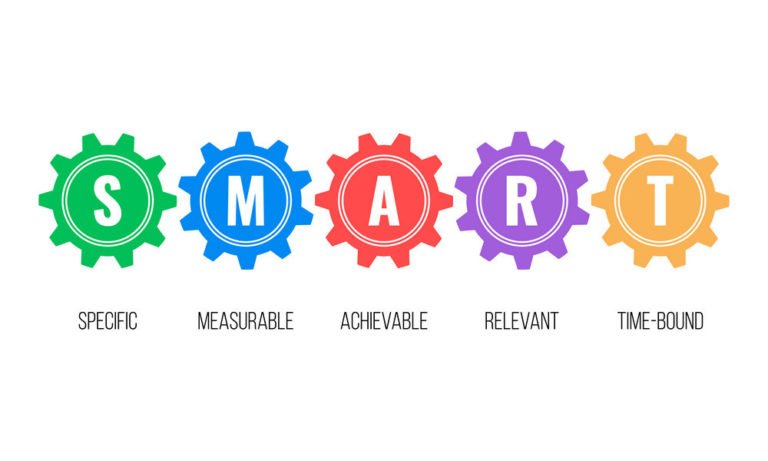 The SMART method goal-setting is a well-known approach in optimizing performance. Here’s what SMART Goals for writing looks like:

Writing goals should be clear and identifiable so the writer can move effectively towards their writing vision. Specific details like, ‘I will reach a 1000 word daily count by noon on Friday’, carries more weight than something abstract. An abstract example might be, ‘Become a better writer by the end of the year.’

Ensure you’re framing your writing goals as specifically as possible as this help focus energy on research and execution.

To assist in tracking progress and making projections, goals should also be framed in a way where they can be objectively assessed. For example, quantifying word counts per day, or the number of chapters you have generated per week are measurable and trackable results.

Whilst the craft of writing is (and should be) challenging, completion of the goal should always be a real possibility. It is therefore important that the writer has an honest relationship with themselves and their own capacity.

Ask yourself these questions:

Writers are encouraged to explore their own imagination but are still bound to the real world. There won’t always be clear opportunities to sit and write. Other duties, relationships and passions need attending too. Writing goals should be measured and assessed in respect to the rest of your life.

Goals should always exist in relation to time as to track progress and force task completion – because finishing the work is the real aim of the game.

Writing is probably the best chance we have at a dialogue with ourselves. Introducing goal setting to these conversations, therefore, becomes a powerful tool in ensuring writers stay committed to their noble craft and continue expanding the collective narrative of our existence in the universe.

Here’s our list of 4 key takeaways to help you stay committed on your creative journey:

Set goals in line with passions and interests

You will inevitably face challenges and hardships on the writing journey. It may as well be in the noble direction of what you love to avoid burnout and possible resentment of the craft. Stephen King offers a timely reminder that a writer must only do two things to improve: write a lot and love what you are writing.

Understand delayed gratification. Prepare yourself to become more in tune with the craft of writing than the outcome of “being” a writer. You are not going to produce your masterpiece overnight and manage your expectations accordingly.

Goals such as “learn better words” and “become a better writer by the end of the year” are vague goals and can’t be tracked for progress. A clearly defined writing goal is more realistic when it can be measured by a word count or bound by a specific deadline.

The purpose of goal setting is to be triumphant after a noble pursuit. Conveniently moving the goalposts to save face is simple cheating and one might consider having a trusted peer or mentor monitor accountability if this is an issue.